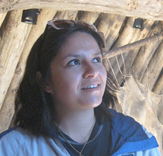 This past summer I had the opportunity to teach a digital media arts camp as apart of the educational outreach for the 60-min Standing Bear’s Footsteps documentary.  I worked as Associate Producer on Standing Bear’s Footsteps along with Executive Producer Christine Lesiak at NET Television. The digital media arts camp met at the Ponca Tribal building in Lincoln, Neb. with 13 Ponca youth aged 9-15 years old, all of whom were descendants of Ponca Chief Standing Bear. We met twice a week this past summer to expose the students to media technology, native culture and explore the “meaning of home.”

About eight of the students showed up regularly and five created videos about what home means to them. We met with cultural people such as Gary Robinette (Santee), Judi gaiaskibos (Ponca) and Allan Kitto (Dakota). University of Nebraska’s College of Journalism and Mass Communications professor, Scott Winter, got them thinking about college choices and helped them think in terms of journalism and how they could define what home means to them. Documentary filmmaker Christine Lesiak (Standing Bear’s Footsteps producer) came to teach the students about interviewing techniques and script writing for documentaries.

I had some very helpful assistants including Alex Epperson and Blue Tarpalechee (Muscogee Creek) who came in and help do one-on-one mentoring with the student in video production and editing. Christine Legband (Ponca) came in to observe the media camp and write an article for the Ponca Tribe of Nebraska newsletter. The Ponca youth group was learning about their history and culture and are in the process of creating the first Northern Ponca drum youth group. Many a day I would come in to the computer lab to see them on YouTube watching and researching other drum groups.

`The students were lectured about video, audio, photo production, storytelling, and college as a real option. They had hands on opportunity in video shooting, interviewing and editing of audio and video. We watched native themed or produced films while we ate lunch; including Muscogee Creek filmmaker Sterlin Harjo’s Barking Water and Reel Injun a documentary by Cree filmmaker Neil Diamond. We also had the wonderful opportunity to video Skype in with instructor Tom Fields and the Southern Ponca digital media arts camp to discuss our project and share a drum song.

The goal of at the class was to introduce Ponca children to media career as an option and get their hands on equipment, expose them to media production. My hope for them was to open them to college, media careers and get an actual video with experience under their belt. I think they learned that media production and digital storytelling is a real possibility for their future. I thought the class got the students to shake up their own ideas of what it means to be Native, what it means to be a Ponca tribal member in Nebraska and how that is different experience from being a Ponca tribal member in Oklahoma. This class provided an opportunity for the students to look at themselves and how they want to present that to the world.

It was my first time teaching an actual class on by myself so apart from being nervous I also gained sills in teaching media curriculum. I learned that a lot of the students liked sports and even talked to the Southern Ponca media camp about their sports. The highlight for me was seeing them open the new equipment and test them out on each other. We used Toshiba’s Camileo Air10 video cameras. The best thing that happened during the class, for me, was seeing connections being made that it IS possible for them to tell stories through digital media, when they connect to this idea and actually like what they are doing. I learned that youth have a lot of energy! And if we as adults and help hone their energy to their own particular passions we can really help the next generation.

From our Standing Bear Education committee we were able to secure funding from a variety of sources one of which allowed us to purchase video and audio equipment, brand new computers and editing software-all of which are now in the hands of the Northern Ponca Tribe to keep. The hope is that they will continue to utilize the equipment and trainings in their future youth programming. Our final class was held at the NET Television station in Lincoln where Christine Lesiak interviewed the students on their experience in the class and I distributed graduate certificates to the students who produced videos. They took a tour of the television building, screened their final projects and received feedback from NET and NAPT producers giving them a taste of life in public media.

Home to me is where my family and friends are, a place of healing and sanctuary where I rest and nourish. Home is a place to be myself and connect with my Creator.